Here's a cautionary tale from the pages of The New Yorker (March 18, 1929). It doesn't go in quite the direction I thought it would... 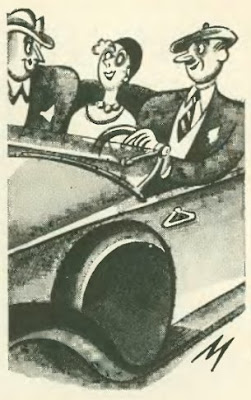 Mais non--Egbert didn't want Percy and Percy didn't want Egbert but the beautiful Clarissa got her dates mixed! Wisely she suggested a ride to cool off the two Lotharios!

But on the way home-- 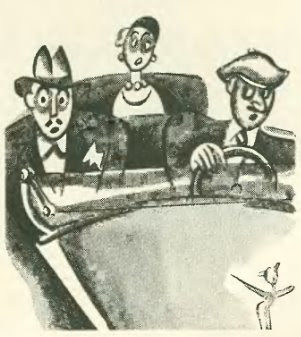 Nobody sang "Just a Kiss in the Dark"--nobody sang at all! Out in the cold the lonely but beautiful Clarissa realized the futility of pinning one's faith to a temporary deodorant!

Yup, it's good old Odorono again, telling flippant flappers everywhere that if they use the wrong deodorant, they might end up in the rumble seat.
Posted by Adam Thornton at 3:28 PM

But Odorono. Does the product still exist? I seem to remember the name from some obscure shelf display or ad.

From the second illustration, I guess there's no action in the back seat - you know, don't come a-knockin' if the rumble seat's a-rockin'!

Well, I personally thought that Egbert and pal were going to get it on without her, but maybe one of them had BO as well.

I think Odorono is long gone. I've posted a few of their adverts in the past and I think Eric Little provided some Odorono factoids in the comments, but now I think they're most famously remembered in the Who song of the same name (and the cover picture of one of the band members using a big Odorono stick).

How sad - but for Odorono, there could have been a Clarissa-a-trois!