In the Old Towns Long Ago 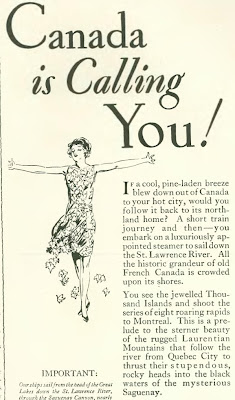 Unless you're Natasha Richardson, a Quebec vacation is probably just what the doctor ordered, especially if you're an American in 1929 and are tired of visiting speakeasies.

The New Yorker had been advertising Quebec vacations since its inception, but I notice that as of 1929 they've really starting ramping it up. References to Lower Canada are showing up in both articles and advertising. It must have been the Hot New Destination for the Idle Rich.

What's interesting to the modern reader, however, is that Quebec in the 1920s appears to be the ONLY place to go. Toronto is merely a transfer point for visitors who decide to go by land. It takes a real stretch of the imagination to remember that Toronto used to be a relatively insignificant place and that MONTREAL was considered to be Canada's metropolis.

Why did this change? I don't know. Montreal is still the place for travelers who love scenery, old buildings, and a European attitude. I'm ashamed to say that I've never been there, and haven't even been to Quebec since I was fifteen.

Anybody up for a road trip? I want to wear a sundress and bask in the blowing leaves of the Gaspé.
Posted by Adam Thornton at 4:27 PM