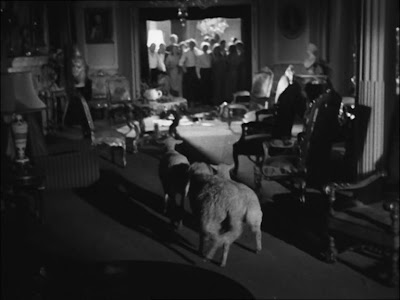 Twenty guests arrive at a posh dinner party, from which the servants have mysteriously vacated. After eating, they retire to the music room, and they remain there long after they have outstayed their welcome. Instead of leaving, they lie down around the room and spend the night, and it doesn't take long for them to realize that they're trapped; they cannot leave the room.

What makes "The Exterminating Angel" so chilling is that the barrier PREVENTING them from leaving is not a physical one; it's an extremely human PSYCHOLOGICAL barrier composed of rationalization, convention, and lack of initiative. When somebody tries to enter or leave the music room, they do not bump up against some sort of invisible force field. They simply come up with reasons to NOT cross the barrier, or with reasons to prevent others from doing so, even though they realize on various levels that none of it makes any sense.

We've all seen variations of "The Lord of the Flies," wherein a small band of people tries to survive -- physically and psychologically -- in an inhospitable environment. In "The Exterminating Angel" you get rich women in expensive gowns forgetting how to comb their hair, and rational people falling back on religion and masonry. As the days go by the situation becomes increasingly hopeless, desperate, and -- since this is a Luis Buñuel picture -- surreal.

I'd previously watched "The Exterminating Angel" about ten years ago on a grainy multi-generation video cassette. The fact that I could barely see what was going on added to the movie's terror. But now that it's been lovingly restored on a Criterion Collection DVD I can safely say that it's even MORE disturbing when you can see every aspect of their deteriorating room, and every blemish on their wasted faces...

...and then the camera pulls back to show you that they're simply standing on the other side of an open doorway, and you get an even bigger chill up your spine.
Posted by Adam Thornton at 4:03 PM

Your post on this film reminded me a bit of 1945, "Dead of Night". Not quite the same genre, but somewhere in the same neighborhood of recurring nightmare.

If you are familiar with both films (I have not seen "Exterminating Angel," are there similar moments of horror? "Dead of Night" can be genuinely, deeply disturbing.

I will add "Exterminating Angel" to my growing list of rainy-day movies to watch (but I have so much else to do, it may have to be postponed until retirement!).

I'll have to check out Dead of Night...thanks Gary!