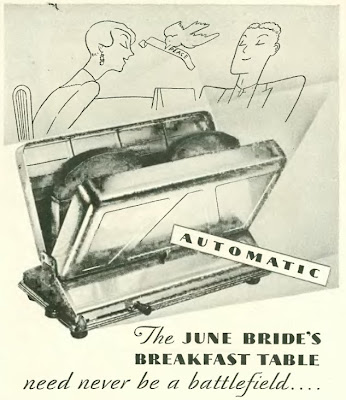 As of June 15, 1929, Edicraft has discovered how to keep marriages intact!

MR. HORACE SNOOPY PEEK, late of the Prohibition Enforcement Squad has been doing a bit of research.

According to Mr. Peek's charts and graphs, most marriages are wrecked at the breakfast table. "Cold, burned or slow-to-make toast causes young husbands to look up telephone numbers," reads his report. "Only in homes equipped with the Edicraft Speed Automatic Toaster does marriage remain stable."

And can you wonder? Even the most inexperienced of brides can turn out crisp, golden, hot on both sides toast with an Edicraft while making snappy conversation that will keep hubby's morning paper unopened--yes, unnoticed.

Slip two slices of bread in the Edicraft, turn on the switch, and a few moments later you are gently interrupted with two temptingly browned toast nuggets, done to a turn on both sides. No watching, no chance of burning, all you have to do is reach for them in a bored, well-bred manner.

There's no word on how the "inexperienced" brides could keep their husbands distracted for the REST of the day -- toast for dinner? toast in bed? -- but I suppose this was a good start.

PS: If the pages of The New Yorker are any indication, the Edicraft and the Toastmaster were battling for supremacy in 1929. Who will finally win? I'll keep reading, and when I find out I'll let you know.
Posted by Adam Thornton at 7:53 AM

How ya gonna keep 'em down on the farm after seein' this-here contraption? Ask "Earl":

'Me an' the missus, ya know, right from th' git-go, had th' mornin' routine worked out jes' fine.

She'd put on the skillet and griddle, and whup up a fine mess o'grub. Conversation? Well, listen here:

An' so on. I read th' paper, and was kept informed on th' vittles' progress. An' I never strayed...long as th' grub was good. Also we didn't have no phone here on th' farm.'

Uh-oh - The "anti-New Yorker" struck again...Must have been the Conficker virus??