I know what you're craving...you want to hear some tap-dancing jokes from 1929! Fortunately I just ran across this advertisement for the Jack Donahue / John Boyle school. 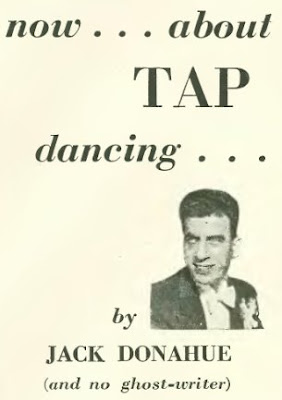 Jack -- the guy in the picture -- was known as an eccentric...a tap dancing comedian! He was so convinced that tap dancing was fun that he packed his advertisement full of stinky jokes! He even wrote them himself! No ghost-writer!

MRS. C. CLARK, of Park Avenue, has formed a new beginners' class with some friends. She and a couple of gentlemen were running over the class work while dressed for the street. One of our teachers said, "You can't enjoy that work with high heels." "They're not heels," sez she, "they're nice young fellers."

MARILYN MILLER, Warner Bros.' star in coming production of "Sally," who has been working two and three hours a day on step creations by Johnny Boyle, stops a minute and asks, "If, when I get to California, I forget one of these steps, what'll I do?" "Call me up," sez Boyle. "I'll put the phone on the floor and do the taps for you." "Won't we be pinched for tapping the wires?" asks Marilyn?

A joke so good they went all the way to California to get the punch line!

Fortunately, Donahue is aware of his own failings:

That's old, but so is dancing which gets better all the time and that's more than you can say for fish...

WHAT? Jackie-boy, you tap dancing eccentric...WHAT?

Anyway, the jokes are terrible, but the REAL punchline for the advertisement is the picture of Donahue's partner John Boyle, who looks like he's about to murder somebody...probably somebody who always tells stupid jokes and grins like a loon.

Andy: "Doc, I had the worst dream of my life last night. I dreamed I was with twelve of the most beautiful chorus girls in the world. Blondes, brunettes, redheads, all dancing in a row."
Doctor: "Hold it, Andy. That doesn't sound so terrible."
Andy: Oh yeah? In the dream, I was the third girl from the end."