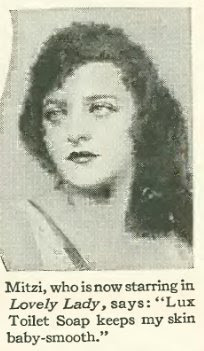 Early New Yorker magazines are absolutely AWASH with advertisements for Lux Toilet Soap. You can't turn a page without running across an enormous Lux centerfold spread, in which some famous Broadway actress describes how Lux manages to keep both her complexion AND her stockings clean. It's a miracle!

I read all the Lux advertisements because I'm hoping to spot early photos of up-and-coming actresses, but in the issue from May 25, 1929 my attention was caught by...Mitzi.

There's nothing particularly fascinating about her appearance or her run-of-the-mill testimonial, but I'm a sucker for women named "Mitzi," and yet I'd never heard of one who was known ONLY as "Mitzi."

Sure there was Mitzi Gaynor, and Mitzi Green, and Mitzi DuBois, but they all came later and I'm beginning to wonder if they were named AFTER this woman. I'd like to prove this hypothesis but the strange thing is...

...there's virtually nothing about her on the internet at all. How strange is that?

Part of the problem is that she shares the same first (and only) name with a bunch of more famous Mitzis. Another problem is that she apparently never made a movie, so the Internet Movie Database is unusually useless. In addition, the "Lovely Lady" play has been totally forgotten, closing on Broadway after only five months and then relegated to the sticks.

The only handle I've managed to get on the mysterious Mitzi is through a piece of sheet music that was released from "Lovely Lady," a song called "One Step To Heaven" (with ukulele accompaniment, natch). Through this I stumbled on "Scientific Commons" (of all places) and a list of four pieces of sheet music that Mitzi was credited with. 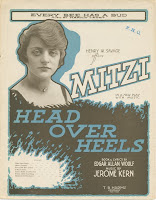 Along with a brief contemporary review of "Lovely Lady" from another magazine, I have been able to piece together that Mitzi was a comedienne who was performing at least by 1918, singing "Every Bee Has a Bud."

When I looked at another of her songs ("Ha-za-zaa" from an operetta called "Sari") I had my final breakthrough. A few more searches along those lines brought me to a 2005 master's thesis by Jessie Wright Martin, in which Mitzi's true identity is finally revealed:

The show's title role on Broadway was assumed by Hungarian soubrette, Mizzi Hajos, who won instant fame; so much so that she changed her name to simply Mitzi, claiming that American audiences wouldn't know how to pronounce either of her Hungarian names.

I don't know about the claim that she changed her name AFTER "Sari" -- considering she was apparently billed as "Mitzi" as far back as 1918 -- but otherwise the mystery has been solved. And if you plug "Mizzi Hajos" into Google you get a respectable amount of information, and even a link to her only known recordings.

Now I can stop caring.
Posted by Adam Thornton at 6:01 PM

Y'know, if you get tired of your current interests, pursuits and employment, there's always work for good sleuths!

We expect to see you on Cold Case someday - but not, of course, as a missing person!