From the Dot Matrix Digitizer to the Thunderscan: '80s Technological Kludge

Hey kids! Put down your DNA-sampling iPhones and listen up. This is how it used to be.

During the mid-80s, scanner technology was just entering our consumer consciousness. We knew that lucky businessmen had something called "Fax Machines," but those of us at home were totally unable to get photographs of lingerie models into our 8-bit computers (without tracing them on a transparency, sticking the transparency to the television set, and then drawing under it with a joystick-driven "fun with art" program).

But all this changed during April 1985, when Antic Magazine published instructions for..."The Dot Matrix Digitizer."

Here's the basic (and totally ass-backward) idea: you remove the printhead from your dot matrix printer and replace it with a homemade light pen. Instead of putting blank paper in your printer, you roll in the picture you want to digitize...say, this picture of handsome devil Sam Tramiel. 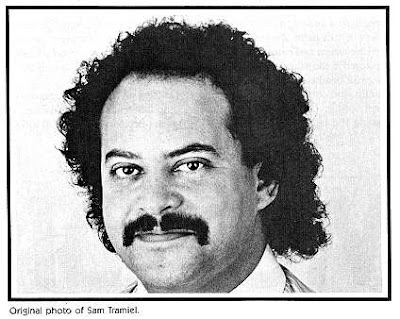 Then you ran a program which fooled your printer into thinking it was actually printing something, meanwhile retrieving the information from the light pen which was now creeping back and forth over the picture in your printer. Sixty minutes later you got this! 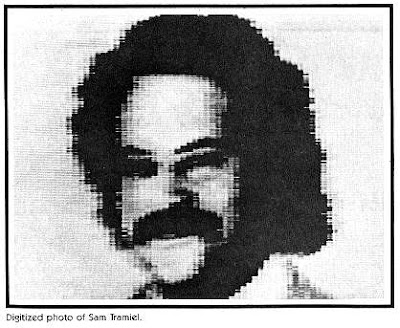 That's right! Not only could you cheaply digitize pictures of Sam Tramiel in the comfort of your own home, but you could ALSO make him look like Gene Shalit!

When I first read this article I thought "Wow, what a ridiculous Kludge...I bet nobody ever did it except the staff at Antic Magazine!" Then I learned about the "Thunderscan," a product for the first generation Macintosh which did exactly the same thing.

We truly live in a world full of inventive and crazy people. It's a good thing the inventors of this technique never decided to "Go Galt!"
Posted by Adam Thornton at 7:44 AM

I remember the product - at least, from the ads, articles and reviews. Before inexpensive scanners became available, this seemed to be an innovative way to get pictures into your computer. I never had or used one.

Judging from the speed, I guess that “Thunder”scan is appropriate compared to thunder's companion, lightening. Thunder is many orders of magnitude slower than lightning!

In that era, too, we had some of the first crude video-capture boards. Imagine, printing television screen data? The beginnings of the greater digital convergence…

Yes, thunder, as in "arrives much later than lightning." :)

I just came across a review for a Macintosh capture board from the same era...apparently the main problem was that it could take about twenty seconds to perform the capture "so the subject had to remain very still." Sounds like Victorian-era cameras...

My father told me that the stern expressions on some olden photos resulted from having to hold the pose for so long. He probably was right.