A Bit More About "Family Feud"

Game shows are a form of drug. They're breezy and slick and fast-paced, with all of their drama resolved in a few minutes...this element appeals to our lazy, spectacle-seeking sides. The winners are genuinely ecstatic and we celebrate with them. The losers are gracious and we admire their good sportsmanship. On top of all that we get to test our OWN knowledge, participating as though we were actually there, albeit without the inevitable pressure of making asses out of ourselves on network television.

All drugs take their toll, though, and after a weekend of "Celebrity Family Feud" I feel slightly nauseous. I never want to hear that theme song again. I have a headache from the endlessly-repeated "Survey SAYS!" At night I dream about the members of "Eight is Enough" and "Love Boat" moving into my house and snorting coke off the back of my cat. Don't tell ME that I've never suffered.

I do have to temper somewhat my negative impression of Richard Dawson. I still think he's a pig, but it appears that 95% of the women were either indifferent to or flattered by his attentions; when I wrote my last screed I had only watched about six episodes, in all of which he was particularly drunk. Dawson was an aggressive man-handler of both women AND men, and I realize that this was considered an attractive part of his "schtick."

Dawson may have been an effective woman-killer, but the children sure hated him. It's painful to watch him try to "draw out" precocious Hollywood preteens who can barely disguise their disdain for him; Dawson acts like the slightly perverted, faux-hip grandfather that you dread visiting on Christmas. As messed up as MY grandfather was, though, at least he never launched into pointless impersonations of W.C. Fields. Nope, my grandfather just peed.

Picture this: the show's producers have already made the dubious decision to pair pre-adolescent Ricky Schroder with reigning "Playmate of the Year" Shannon Tweed. With the two of them at the podium, Dawson initiates this classy bit of comedy:

DAWSON: There's a whole book about her. (Gasps of surprise from everybody on stage).

DAWSON: How old are you?

SCHRODER: Twelve and a half.

DAWSON: When you're eighteen I'll show it to you. (More gasps and nervous laughter. Dawson points at his belly-button) She's got a staple right here. 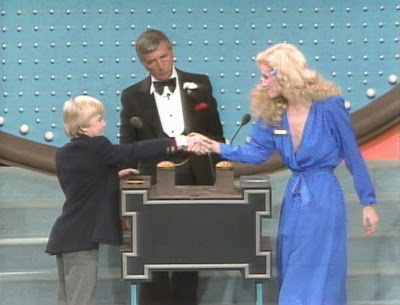 Richard Dawson has a quick wit, don't get me wrong; he can banter with the best of him and he can come up with some amazing thing. But put him next to a kid and he veers completely off the rails, and then continues to veer until he has crushed everything and everybody in sight. What a weirdo.

As "risque" as the '80s were in many ways, these shows have given me an eyeful of "conventional network sexuality," which might explain why titillation is often so boring to watch.

So yeah, enough is enough. Somebody has to invent a sort of "colonic purge" for the gameshow-addled brain.
Posted by Adam Thornton at 8:13 PM

For the scrabolous fans out there (honestly first time I am hearing about it. :)

I really needed a laugh today and your Family Feud blog did it for me. Thanks Muffy!

Now, if you were going to pose a FF type question, what would it be?

"All values are doubled, top six answers on the board, here's the question:

"Name a disease you can catch through casual contact with a game show host."

"Name something that every man has, and most women want."

I bet there would be a lot of blank stares.

That's a good one. The audience would go "woooooooo..." and Dawson would say something like "Depending on your answer, Gilligan, this may be the last episode we ever do.

"The Skipper's gonna kill you if you don't answer quickly. Three seconds."

"If you get this one your wife will be one happy lady."

"She was last night!"

"I'll do the jokes here, Gilligan."

My God, who is that creature?