The Adventure of the Behaviourist 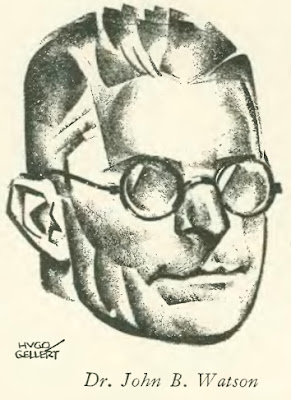 During my first years as a Psychology student at the University of Waterloo, I was a dedicated behaviourist. There was something comforting about its endless chains of predictable cause and effect. Next to the more "subconscious" disciplines it was downright simple: you reward or punish a person for doing something, and eventually you can "condition" them to do what you want.

Behaviourists got results...and they could QUANTIFY them! They used a mixture of hard-nosed determination, patience, and metrics to -- say -- turn a kleptomaniac into an upstanding citizen. And I quickly discovered how useful the behaviourist approach was when dealing with pets; thanks to B.F. Skinner and his operant conditioning I had the family cat rolling over for chicken in a pretty much consistent way.

But courses in child development threw me for a loop, with their revelations of hard-wired mechanisms for things like language and knowledge of "self." Suddenly there were parts of human behaviour UNRELATED to conditioning. The REAL blow was the study of Symbolic Interactionism, which shows that we humans relate to our environment in a symbolic way, and therefore a "stimulus" is what we believe and perceive it to be, not something pure that always means the same thing, all the time, to all people.

So I've been forced to let go of much of my love of "billiard ball determinism" and hard-nosed behaviourism, partly because so many other forces seem to be at work, but mainly because all the factors involved -- people, problems, stimuli, responses -- get tangled up with other forces in the real world, making the "laboratory" approach to therapy just as difficult as any other.

So while I skip most of the New Yorker profile pieces, it was interesting to read Kenneth MacGowan's profile of Dr. John B. Watson in the October 6, 1928 issue. Despite the weird synchronicity moment in the first paragraph (Watson was annoyed by the character of "Dr. Watson" in the Sherlock Holmes stories, and here I am reading those stories right now), it's interesting to read a relatively muck-raking article about his academic problems.

By the time of the article Watson had long left academic life. The article claims that this was due to his intransigence and controversial studies, and it inexplicably ignores the entire scandal that surrounded his leaving: his adulterous affair with graduate student Rosalie Rayner. This is my first indication that the New Yorker profiles may have been a BIT of a whitewash.

(Incidentally, for fans of Thomas Pynchon, Watson and Rayner have the dubious honour of conducting the infamous "Little Albert" experiment which gets pride of place in Pynchon's "Gravity's Rainbow.")

Anyway, Watson was hard at work in the advertising business during 1928, helping with campaigns such as -- more synchronicity here -- Odorono. He made a lot of money perfecting the advertising agency's ability to frighten and titillate us. Maybe that's the way we should remember him; behaviourism was always best at curing phobias, and now we know it was good for causing them as well.
Posted by Adam Thornton at 7:47 AM

What DID ever happen to Little Albert? Wouldn't it be cool to try these tests on some unsuspecting kid today...hmmm...?

In memory of Little Albert we now have certain laws... :)

Sadly the child disappeared. If you read Gravity's Rainbow you DO find out what happened to Albert, but I won't give it away!