I've rented a collection of "All Star Family Feud" episodes. I'm not exactly sure why I've done this, but I've had a number of revelations while watching it this afternoon.

First, Richard Dawson was a f*cking pig. It might not have seemed that way to the general public at the time -- I certainly don't remember anybody talking about it in the '80s -- but his attitude toward his female guests went beyond "chivalry" or "1984 machismo" into aggressive lechery.

I might dismiss his constant stroking, grabbing, and kissing as "of the time," but the women he's doing it to certainly don't seem to think so; just watch as they shrink from his touch, and watch as he gleefully comes back to do it again and again. It comes across as a form of physical intimidation that you don't see from TV superstars anymore (I hope).

Granted, some of the women seem quite happy with this, but most of them are obviously disgusted. Here's Dawson trying to grab the hand that Maureen McCormick is trying to make discreetly unavailable. She's probably in a tizzy about the cold sores she got from him last week. Christopher Knight, barely sentient, is smiling because of gas. 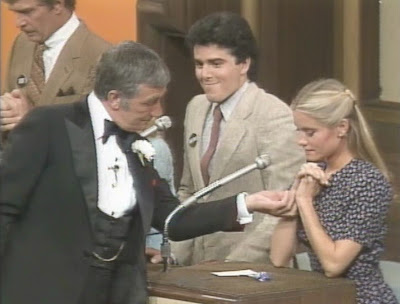 Second, the country hoe-down atmosphere had always escaped me. Our family watched this show a lot and I never noticed its rural theme: fiddle music, needlepoint set decoration, Dawson's plantation-owner outfit, the entire IDEA of a "family feud." It's only now that I hear the weird way that the announcer says "Family Fyeee-youd!"

An American "yokel show," and by no means the only one...we've had them in Canada as well.

Third, people get nastier as shows go on. It's interesting how the competition -- both between and within teams -- gets less friendly over time. The camera loves to linger on the glares and sneers, and there is something PARTICULARLY scary about a sneering woman who has feathered hair and professionally-applied raccoon eyeliner.

Fourth, the Petticoat Junction people were the coolest. I've never seen Petticoat Junction, but they BY FAR outranked the other teams in terms of personality, graciousness, and intelligence. Since I love "Leave It To Beaver" and at one time enjoyed "The Brady Bunch" this is a hard thing to admit.
Posted by Adam Thornton at 8:52 PM

Oh yes, Dawson was such a lecherous creep. I think it was my grandma who would always get upset about how he'd slobber over the female guests.

Though he's always a lech, during the first few episodes I watched he was PARTICULARLY bad. He is so obviously drunk in some...just imagine the poor floor manager or whoever was responsible for keeping him in line. "That's enough, Richard...you want to look good for the ladies, don't you?"

Good for your grandma.

Sadly, I can sing the entire theme song - freaky I know.

And think what you will of me, I always had a little crush on Richard Dawson, back to his days as Newkirk on "Hogan's Heroes".

Good God, Hilda, you brought the song back to me as well! I MUST have seen "Petticoat Junction" at some time.

The explosion of TV shows on DVD has been very strange for me, reawakening memories that have lain in storage for thirty years.

As for Dawson, there are certainly things about him that I admire -- he could be very very funny, and he was also good at putting many of the Family Feud contestants at ease -- but it's just his grasping and "grrrrrr, you're beautiful" stuff that drives me nuts.

Not surprisingly, he was no match for Charro's sexuality. She obviously terrified him.

Charro terrified everybody. Even when I was in the worst throes of pubescent horniness, there was something about that woman that just freaked me out.

I'm sure she's a lovely person, though.

I'm curious about Charro now. For some reason she never appeared on our TV when I was a kid, or I'm sure I would remember her.

I'm wondering if she was really like that or if it was just a profitable act...

Get this - you can book her for your next party!
http://www.grabow.biz/Contemporary/Charo.htm

I can only assume, Kim, that you have this link because YOU YOURSELF want to book Charo!

Wow, is that for real? It doesn't look like an "impersonation" company, but it's strange how they ALWAYS call her "Charo Latin American Singer & Entertainer," like they're afraid of copyright issues or something.