"You" said you wanted more pictures from the Emmanuel Bible College yearbooks...who am I to refuse! I just wish I had a working scanner, instead of a small Hewlett-Packard device that makes a terrible grinding noise and whispers "Need more ink cartridges" when I turn it on.

As I've said previously, yearbooks are fascinating and funny things in so many ways. The EBC yearbooks, however, have an additional interest for the secular reader because they're so totally focused on God, but without the "Christianity is COOL!" element that would no doubt be there if they were external, proselytizing documents.

Ready to see the bible students in their natural habitat, like rabbits in a glass-walled hutch? Without further ado, here are some choice moments from the 1966 edition of the EBC yearbook, "The Pilot."

First off, the prayer/bomb drill/corporal punishment picture that will soon be the subject of its own fetish. 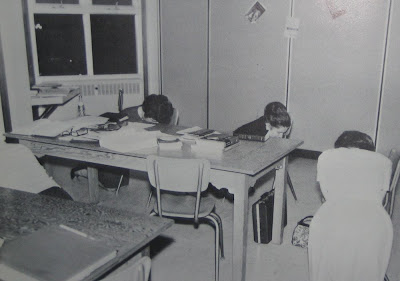 Now that we've got that over with, a few words about the degrees. It seems like the ultimate goal at EBC was to be a "Bachelor of Theology," but I find it interesting that the only B.Th graduates were males, at least for the first several yearbooks that I have. The "Missionary Course" and "Christian Education" degrees, however, were granted to both sexes.

Here's the president of the college at the time, Reverend H. B. Wideman, on a day that I charitably assume was windy. 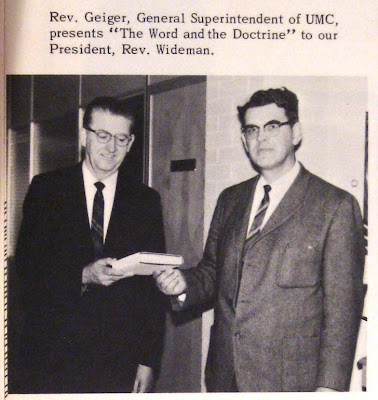 Some sleuthing has revealed that the other man is Reverend Kenneth Geiger, and the book he's presenting -- "The Word and the Doctrine" -- is a collection of papers from a conference about Wesleyanism. What's Wesleyanism? Damned if I can figure it out! That's why Wideman was the president of EBC and the Bachelor of Divinity, not me.

A few thoughts about the teachers that year: none of the women were pretty and most of the men were schlubs, except for Mr. Wilson T. Wiley (English & Guidance Instructor), who wore a small fedora and looked like he wrapped his secret gat in a copy of "Catcher in the Rye." You'll be comforted to know that the "Social Dean of Women" and the "Social Dean of Men" were a married couple, Mr. and Mrs. Warner Spyker.

Here's some insight into student demographics:

The afternoons are times of service, study, and wage earning.

Many students work with Child Evangelism, teaching Bible Clubs for boys and girls. Other students find opportunities to witness while working at a part-time job. At Emmanuel, we have a barber, an auctioneer, carry-out boys, salesmen, office workers, nurses, teachers, farmers, waitresses, and construction labourers.

Here are some girls harassing an old lady to score Bible Points. 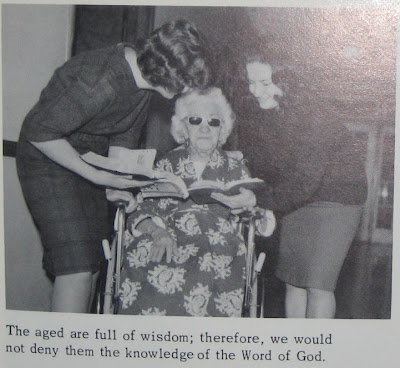 My favourite 1966 EBC students -- my votes for "king and queen of the prom," so to speak -- are paino-playing Fern Densmore and plump squirrel David Hills. The latter's graduation poem is a good example of the beloved artform of BAD YEARBOOK POETRY:

From working in a paint factory he came,
So that he might better uphold God's name
By studying the Word with hope that he
One day, in the service of the Lord may be.

What makes this a bad poem? The ungainly swapping of sentence fragments, sacrificing style (and clarity) to the altar of Thee Almighty Rhyme.

Here's another good poem, for Mervin ("Merv") Richardson, notable for its vague attempt at being personal:

A goal, a goal in hockey
(Even when the road is rocky)
Leading music at Lincoln Heights
Keeps him busy various nights.

I think the yearbook staff got that one in just before the deadline.

To wrap up the 1966 year, here's my favourite picture of them all. I'm not sure if it's supposed to mean what I think it means but I sure hope so! 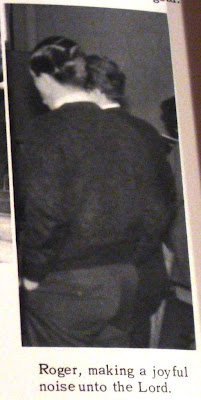 Posted by Adam Thornton at 7:49 PM