Aha, now that I've got my eye out for Cleon Throckmorton's bizarre advertisements, I'm finding more hidden gems. This one's from the June 7, 1930 issue of The New Yorker, tucked in the bottom-left corner of page 94. 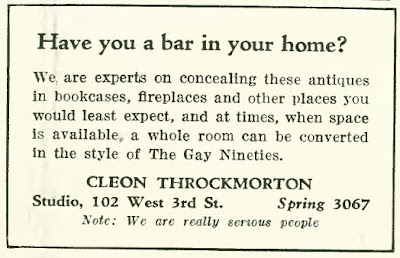 Is this a joke? Was Throckmorton just incredibly strange, either with his finger on the pulse of underground '30s humour or so far in his own world that nothing made sense?

I don't know. I can only assume he's advertising to be hired as an interior decorator, a sideline to his scenic designer business. But at least we can be assured that he was a Really Serious Person.
Posted by Adam Thornton at 10:21 AM

I don't think this was a joke, since Prohibition wasn't repealed until late 1933.

Hiding booze was serious biz back then. And, despite whatever else you may think about Cleon T., he was probably very serious about helping his clients.

That's all certainly true, but the free-wheeling New Yorkers who read this magazine certainly had no worries about prohibition...possessing and serving alcohol in the home wasn't a crime, and it had become an outright joke by the mid-20s to worry about prohibition.

There are many advertisements in the magazine for bars, cocktail shakers, and mixers (though none specifically mentioned alcohol), and the anecdotes and stories frequently deal with the "ha ha" side of prohibition: folks who go out and get an increasingly jaded thrill out of breaking the law, knowing that there's no real danger to them. By 1930 not even the nightclubs were getting busted much, and when they were they just moved elsewhere and reopened.

Actual bootleggers, however, lived in a world of worry.

So while I think hiding booze was serious when prohibition first came in, and probably continued to be in smaller cities where it was actually enforced, in New York and other big cities it seemed to be a joke. The idea of hiding your bar -- as far as I can tell -- would have been on par with any other quaint design choice meant to evoke a laugh from your guests.

*I* think Cleon was being ironic and silly...but maybe you're right, Gary! Maybe he really was a Very Serious Person.

Although the concealed bar might not have been necessary in NY, perhaps having one was a status symbol, or the chic thing to do amongst part of that crowd.

That's the crowd that still had disposable income to fritter away on what they thought were the "cat's pyjamas."

Something futuristic and Art Deco could have been nice to see! Too bad there are no pictures.