I was thrilled with the idea of posting choice moments from the Emmanuel Bible College yearbooks, but after the 1966 expose things became pretty crazy over here. I'd even gone through the 1968 edition and I had some big plans for it, but I'm afraid I've forgotten my "angles" and all I have on record are the pictures I chose.

So this one will be a quickie without any deep insight. Ladies and gentlemen, I give you the 1968 Emmanuel Bible College yearbook. 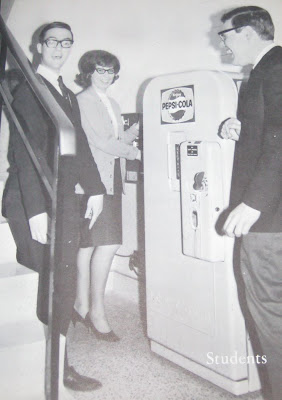 Students! The people in this yearbook are my mother's contemporaries, and she has confirmed that the EBC students were wearing appropriate, up-to-date clothing. It's interesting to note that she found the clothes in the 1966 yearbook to be stodgy and geriatric...what a difference a few years in the '60s made!

Another interesting thing to note is that the woman in the picture -- Donna Barnell of Indiana -- is my nomination for "Queen of Prom!" This is partly because she's got wicked style, but also because she was on every brainy committee that year: Publications (which kept churches in the area notified about the latest EBC events), literary president, student's council (secretary AND treasurer), and school secretary in general. Donna from Indiana, you've earned this honour! 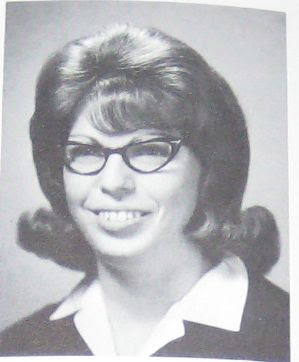 As for KING of the Prom...well, you remember Harry Habel from 1966? He graduated in '68 with a degree in "Special," which I assume meant that they were anxious to just get rid of him. It pleases me to pair a youthful over-achiever with an annoying old farmer. What must it have been like to be Jewish in an evangelical bible college during the '60s? I don't know, but maybe we can glean something from his graduation picture. 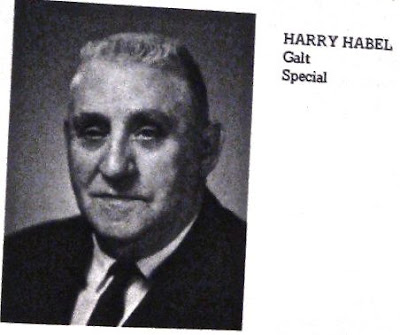 Anyway, one thing that set EBC apart from other schools was its emphasis on "Practical Work." This usually meant "perfecting the skills which send non-believers screaming in the other direction." 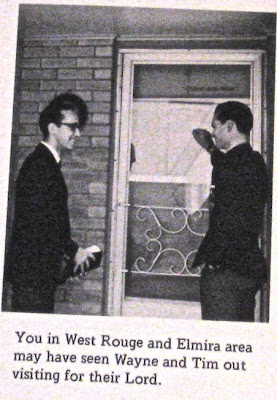 You in West Rouge and Elmira may have kicked Wayne and Tim off your porch.

These last two pictures are my favourites, and they show the "wacky side" of EBC campus life. First, here's Dixie Dean presenting "music from the four corners of the world" at the Christmas Banquet. 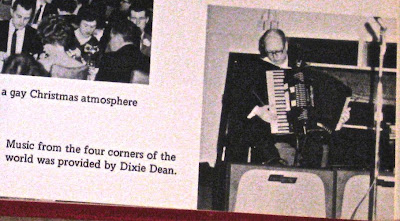 Who's "Dixie Dean," you ask? For shame! He started the "Canadian Accordion Club," and was a bright light in Canadian music during the first half of the century. His star appears to have fallen during the '60s but he worked for the Ontario Conservatory of Music here in good old Waterloo, so his appearance at the banquet must have been a real coup. For those who liked accordions.

Finally, here's one of those yearbook pictures that only makes sense to those who were there. EBC students from '68 are invited to explain not only how good Dixie Dean's performance was, but also why a man in rubber SCUBA gear is molesting this woman in her bed. 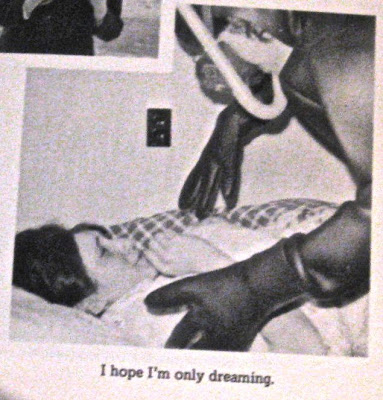 I was going to make some witty comment about Wayne and Tim. Really, I was. But that final image has thrown me.

Nightmarish to some... to others, a turn on.

It's baffling, isn't it?

Prom queen! For sure, these yearbooks paint a fun and close-knit school.

Prom queen! For sure, these yearbooks paint a fun and close-knit school.

Interesting insights into the world of bible colleges. What happened to the yearbooks that you found?

Still got them! And I do plan to put pieces of them online some day, along with the rest of the yearbooks I've picked up.

How many of them do you have all together?