While reading the May 31, 1930 issue of The New Yorker I ran across this advertisement, tucked into the corner of page 46. It was so small that I had to zoom in to read it. 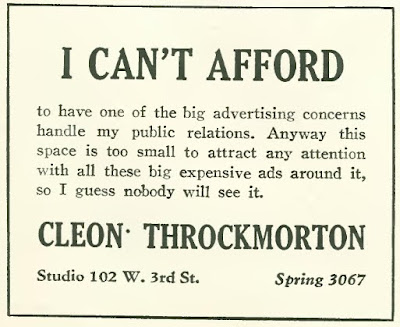 What kind of guy relies on such a self-defeating advertisement, which doesn't even mention what he's advertising FOR?

An eccentric fellow with a high degree of name recognition, that's who. In this case it's Cleon Throckmorton, architect, set designer, and bohemian painter of spunky dancing girls. If you really want an eyeful, check out Erica De Mane's photographs of some of his works at Ristorante Volare.

Meanwhile, over at Shorpy you can also find this amazing 1921 photograph of "Throck" at work (go there for a larger version), along with additional information from amateur sleuths in the comments. Apparently that's his wife puffing on a stogie while modeling. 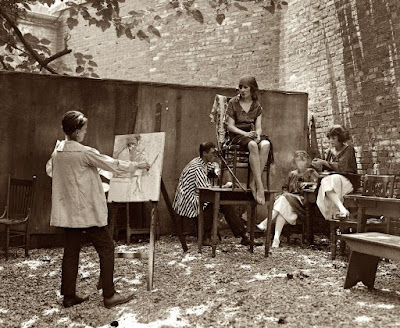 Posted by Adam Thornton at 9:44 AM

Thanks for linking to my blog. Lovely murals, aren't they?

Definitely lovely! And thank you for posting some samples.