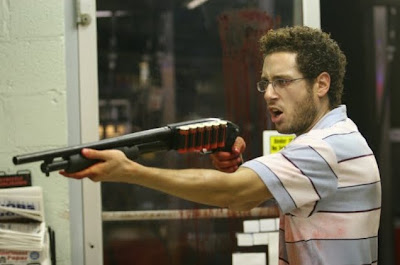 What if you create a monster that is too scary to even film?

If you create this monster from the mind of your wickedness and also the wickedness of mimes and gymnasts, and on the set when it's time to record the movie you say to your cameraman, "Film the creature!" and the cameraman says "It's too scary! I can't even look!" and all you see are the edges of the creature and maybe some flickery light?

It's no use! No matter how much you yell "To the left! The creature isn't what you're filming! That's a shelf in a gas station!"

And not to be sexist, if also you have a female woman with a camera, and you say to her "Film the creature, already! Be brave!" and she screams in fear and in the editing room the footage is shaky like shot by a schoolgirl, one too afraid, who becomes all a'shivery-shakey in the sight of your creature?

What do you do? You must simply make the movie anyway, as the "Splinter" director did, and perhaps you throw up your hands and say "You really should've seen that creature!" and laugh ruefully...the rueful laugh of an imagination too wicked even for horror films, the laugh of a man without footage. He wishes, we think, that someday in the future -- maybe even in a sequel -- his crew will be braver and will look his wicked creature straight in the eyes...then we'll see it and we will believe him!

Until that day the Splinter creature is something seen only with Pause, and even then when it is a blur of spinning in front of the shelves or sometimes beside the shelves. On Pause, the creature is almost caught in a perfect moment. On Pause you cannot hear the dialog of the characters who suffer horrific transformations: the wimp into the hero, the tough girl into crying and all a'shivery-shakey, the heartless brutal villain who is actually not understood by us or even by the writers until we find his whole purpose is to HELP PEOPLE, but we never understood, we didn't stop to wonder until his whole arm was gone, so now we must care?

A man puts a thermometer in his mouth and stumbles coldly in a parking lot for ten minutes with bags of ice against his chest, as a climax, and they sure got enough footage of that part.
Posted by Adam Thornton at 9:39 PM