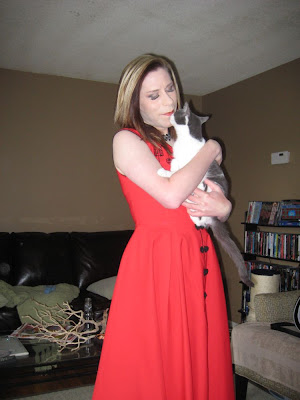 Here's a post for those who like to hear cat stories, or stories about me being analytically happy, or both.

Muffet is a pretty terrific cat.

Suddenly -- instead of the laid-back, sleepy, unconcerned pet that was Zsa Zsa -- I have this quirky, spunky, endlessly-curious kitten who loves me to death and strives to be permanently attached to me. She's settling in a bit more now, but for the last week she has spent every waking moment either on my lap or a few inches to the right of my lap...at least, when she's not racing up a flight of stairs and lunging to the left in an apparent attempt to kill me.

There has been one exception to her Muffy-love, however: she's afraid of my bedroom. I don't know if it smells particularly like Zsa Zsa, or if I accidentally kicked her off the bed the only night she slept there (she weighs 5 1/2 pounds and is therefore less detectable than a pea amongst the bedding), but as soon as she enters my bedroom she becomes a new fearful creature.

By contrast, Muffet-in-the-rest-of-the-house has never seen a nook or cranny she didn't want to climb into. There is no shelf high enough to deter her. She will rocket onto ironing boards, window sills, planters and kitchen appliances without a second thought...I keep a pot-lid on the stove to place over the elements when I'm finished with them, because my biggest fear -- seriously -- is that she'll leap onto a 350-degree burn. Jeez, no.

But as soon as she crosses my bedroom threshold she's like a small child in a haunted house: a discarded article of clothing is a ghost that must be tapped and evaded, a gentle hand is an evil claw, a creak in the rafters is grounds for a mad dash into the far-off basement. The first night she came back from the vet's, she climbed tentatively onto the bed and saw my right shoulder. She solemnly pressed it with her paw and then ran away in fear.

This made me paranoid, especially when my father said "Cats are known for detecting cancer and injuries before anybody else can." The next night she climbed onto the bed, gave me an evil look, and pressed both of her paws against my forehead. Then she ran away again.

Brain cancer and mounting vet bills aside -- not to mention her occasional 5am scream-fights with the Neighbourhood Badass Cat -- life with Muffet is wonderful. She is beginning to learn how to entertain herself. She smells things in that idiotic open-mouthed way that cats sometimes have. Catnip turns her into a whirling dervish. She is clean and healthy and strong and active.

Zsa Zsa reminded me of a middle-aged film star, a sort of Liz Taylor creature who preferred to lounge and smoke and share fond memories about former lovers. Muffet, however, makes me think of a Peter Greenaway character; a Cissy Colpitts, maybe, who collects esoterica and doesn't notice when her vag is showing. Which, because she's a domestic shorthair, is always.

In honour of cats and those who love them, and also in honour of British eccentrics, here's "Cat House" by forgotten indie-minx Danielle Dax. If you haven't forgotten her then simply telling me so will bring more joy to an already joyous weekend (and it hasn't even started yet!)

Posted by Adam Thornton at 6:38 PM

I've noticed the phenomena where a brand new cat is aware of the former cat by smell, and shows territorial respect. I wonder if it's like inheriting a house but for the first year you keep discovering little notes pointing out the former owners favorite cozy spots and and comfortable corners.

That was it exactly...she even found all of Zsa Zsa's old toys and kicked them out into the center of the floor.