A Few Weeks with Muffet 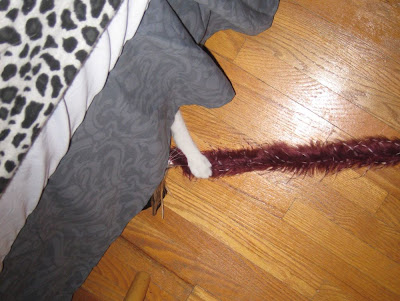 Every day with Muffet is a new set of adventures and challenges. We're both training each other, and meanwhile she's adapting to her new environment AND growing into adulthood. She's bigger and heavier than before but still has the spindly, long-legged look of a furry spider.

Here are some scattered impressions from the past few weeks.

Glad to hear that Muffet is now, er, "Queen of the Castle," (with, um, certain exceptions!).

Her acclimatization has been remarkable, and she’s clearly comfortable with both you and your home. And she’s energetic – no lethargy there.

BTW, there’s a great New Yorker cartoon which you might have seen, showing a coroner’s office (everyone’s a cat in this item). Regarding the deceased, the medical examiner is saying something like, “Yup…curiosity.” It’s not riotously funny, but it’s a visual confirmation of the old motto.

"Energetic" doesn't begin to describe her...is there an adjective stronger than "manic?" :)

And yeah, "FUO" really does sound like "Fever caused by something that nobody wants to pay to find the reason for." In a human we'd do a bit more work, and even then it's usually just "A cold. Or a flu. Or something."