Trapping the Bird and Sealing it Up

What the hell is it with olde-timey people and their canned poultry?

You may remember the vacuum-cooked chicken-in-glass of a few days ago...in fact, I bet you've been unable to get the imagined taste of it out of your mouth.

Now, to cleanse your palette, I give you the Hormel jellied whole chicken. 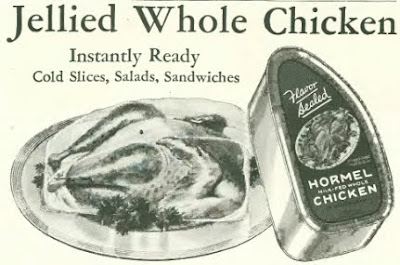 But that's nothing compared to the advertisement on the NEXT page. It's SQUAB! Ready to eat! In tins! 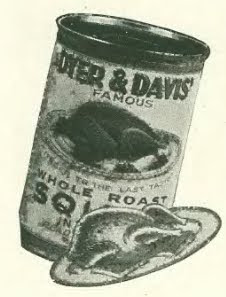 What's "squab?" The advertisement spells it out.

Folks fall out of saddles and leap out of lakes--when you mention this!

NOTICE!!!
to all picayunish appetites!

Have no fear: We New Yorkers know what "squab" is. But what about all of that chicken "spam"?

About these "delicacies" (The following Brooklynese is NOT my family history):

"We always soived 'em wid dem oerster crackers dat we kept in de hidden bar...But for us folks, fuhgeddaboudit! Give us a Nathan's wid 'de woiks' any day!"

This should be translatable without using Babel Fish!

Oerster crackers, not Caviarettes! What a slight to high society!

I hope someday to finally eat squab but I have no idea where to get it.