Hot on the Feline Heels and Hot to Trot and Anxiety 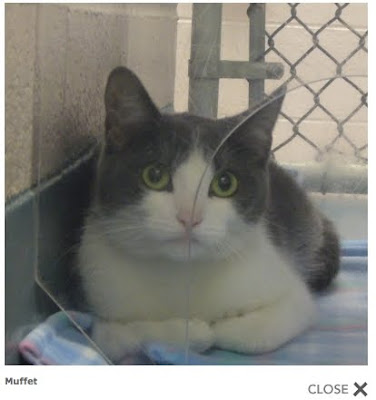 If I hadn't gone out to find a new cat companion, I would probably be in an agony of depression right now. Instead I'm in an agony of worry, which is really no better or worse I suppose.

My mother and I went to the Humane Society after being unable to find a suitable cat at Petcetera. The Humane Society was full of people checking out the cats and climbing into their cages to sit with them, so I was already feeling a sense of urgency.

When I walked past the cage of Muffet, she reached out and gently pawed at the glass, so I asked to sit with her and evaluate her personality.

Muffet was very outgoing, wanting to be rubbed and making lots of vocalizations. At the time she seemed like the right cat, so after ten minutes or so with her I asked for the adoption forms.

But as I was filling them out I began to realize that Muffet's rolling-and-meowing routine wasn't stopping and -- frankly -- was getting a bit annoying. When the Humane Society volunteer returned, I said I was having second thoughts, and she said "Oh, I see what's happening...Muffet's going into heat."

She reassured me that getting her spayed would fix the problem, and also that veterinarians will spay cats in heat. Relieved, I filled out the forms and handed them in...

...but something was in the back of my mind. As I stood waiting for everything to be entered into the computer and processed, I began to wonder if I should adopt a cat who I had only interacted with while she was in heat...what if her personality radically changed afterwards, or what if she continued to be this manic? Something in me was struggling, I wanted to say "Wait, maybe not," but adopters were wandering around the halls pouncing on cats and I was afraid that if I waited I would lose a potentially great companion.

Then, after I paid, the receptionist heard that Muffet was in heat. "Oh, you're adopting a cat in heat? Bless you!" she said, laughing.

Oh shit, I thought. What am I getting myself in for?

The woman at the pet store had equally ominous "cat in heat" stories to tell, and everybody online talks about what a disruptive and annoying experience it is for cat owners. They also say that vets may refuse to spay a cat in heat, so I may be looking at two weeks of this "ominously-described" behaviour.

I say "ominously-described," because Muffet hasn't really done much yet. She's still getting used to my house so -- in between coaxed exploration -- she's hiding in the basement crawl space. No "caterwauling" yet, but when I pet her she begins to rub herself all over me in the "cat in heat" way, and I automatically get anxious...

...and is an anxious pet owner a good pet owner? Am I already souring our relationship? Is Muffet going to do things before I can spay her that will make me dislike her?

I say this as a person who is quite obsessed with my routine, my sleep, and my stretches of "quiet time." A cat in heat sounds, to me, the way that kryptonite probably makes Superman feel.

So I'm WORRIED. Part of this is because this is a new situation and I don't respond to new situations well. It's also that I kick myself for not giving it all more consideration before I took Muffet home (I feel irresponsible), and the knowledge that if somebody had said "Muffet will yowl loudly and constantly for hours on end at all times of day and night," I would not have consented. I didn't know what was involved.

I tell myself that if I can't get her spayed until she's out of heat, and if her heat-behaviour drives me over the edge, I can surrender her back to the Humane Society and accept the lost money (and the additional outlay of the surrender fee), and also accept that this is not fair to her, it's annoying for the Humane Society, and it will probably negatively-impact my chances of adopting another cat.

The thing is, when I'm on the brink of uncertainty I absolutely torture myself with worry and anxiety. As an adolescent I would work myself into full-blown, incapacitating panic attacks, and while I no longer (it seems) react in such an extreme way as an adult I still do put myself into a bad state. This coupled with a crushing grief about Zsa Zsa and the additional anxiety of a Saturday-night drag show and a (next-) Wednesday-night spoken word stint.

I'm writing all this out because I recognize that my anxiety is based on cognitive-reasoning flaws, so when I express everything (as I have here) and see that it isn't half as catastrophic* as I thought it was, I can calm down to a point where I can (hopefully) sleep eventually. You blog readers -- and "you blog" itself -- are at this moment substitutes for a friendly, logical, reassuring voice.

What, ultimately, do I need to recognize in order to calm myself down? The same things that I ALWAYS need to recognize but I so often manage to forget:
In my head I believe all three of those things. Now if I could only convince my adrenal glands...

Don't overthink it. Important decisions are ALWAYS meant to be taken with a certain amount of uncertainity built in. What is that old cliche about living life forward and understanding it backward? :)

She's so sweet-looking! Don't worry, while the cat-in-heat experience is nothing I'd want to experience again, every cat owner should have to at least once. I am sure she'll be fine after you have her spayed. Trust her and yourself, Muffy. The anxiety is understandable considering the mix of emotions you've been having since Zsa Zsa died and Muffet entering your life. I hope to meet her this summer! :)

First off, I applaud your dedication as an animal lover and I think, inherently, that you know and trust that part of yourself very well.

Second, tanzi is right. You've spent a significant stretch of time with Zsa Zsa and that may be colouring your perceptions now with Muffet.

Try not to fret about things that may happen because they most likely won't and if this situation is amplifying other underlying emotions and reactions to situations, tease out the knotted ball and try your best to deal with each thing on its own terms - a daunting task, but well worth the time for peace of mind.

Too often, we snowball ourselves into avalanches and lay at the bottom of it all in a daze. Sometimes, we are our own worst enemies.

Oh Muffy, I'm so excited that you adopted Muffet! The "in heat" phase isn't all that bad, it's kind of funny, actually. As soon as you get her fixed she'll be just fine. And I'm so happy that you saved her life, I mean really, that's wonderful. Just remember, she isn't Zsa Zsa, she'll have her own personality and quirks, but she will give you years and years of love and companionship and you will be so happy she chose you!!

You're all using such perfect words, there's a gem of perfect wisdom in every one of your comments! I certainly do need to "live life forward" more often!

You're also right that I'm comparing this spunky young cat with the sedate, passive, calm and tranquil friend I had so many years (though all you need to do is click on the "Zsa Zsa" link to see that life wasn't always rosy with her).

And most importantly, you're right that I'm on an emotional rollercoaster: putting Zsa Zsa down -- which I can't really think about too closely -- and lack of sleep, mostly.

I think this will all work out once I've relaxed, slept, and grieved.

It's too bad that the shelter didn't have a policy for adopting out cats who weren't fixed. :(

While it *IS* technically possible to spay a cat while she's in heat, most vets would prefer not to do it.

I think this is because when the cats are in heat, the blood vessels are engorged and that sort of complicates the surgery. Your vet might charge you more than this than with a regular spay.

Heat periods can last from anywhere from a few days, to up to a week-and-a-half. And then they can go back into heat every 10-14 days or so. :(

Keep a watchful eye on Muffet. The last thing you want is her accidentally slipping out and "getting some"!

Hang in there! You're beginning a new chapter, with a new cat companion, and the other posters' collective wisdom is probably right - just ride it out. I'm sure your affection will be returned many times over.

I'm just surprised that shelters don't spay or neuter before a pet is adopted.

Anyway, be a good friend to Muffet. Y'know, like in the song..."that's what friends are for"!