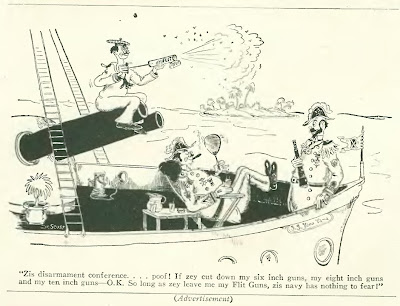 When I say repeatedly that the early New Yorker magazine didn't usually tackle serious subjects, I was obviously lying, because here is Dr. Seuss referencing the London Naval Treaty.

Okay, okay, the magazine HAD mentioned the treaty in the past, but only in the context of goofy wordplay or in "The Wayward Press," their semi-regular column about what OTHER periodicals were printing. Written by Guy Fawkes, this was a bitchy take-down of New York's newspapers, often criticizing inaccuracies, inconsistencies between papers, yellow journalism, or -- Fawkes' personal beef -- the misleading elevation of minor, trivial occurrences into headline-breaking NEWS!!!

So although The New Yorker never REALLY covered the London Naval Treaty, their treatment of it probably reflected the mood of the people at the time: that it was a blustery piece of diplomacy which never seemed to end and which would ultimately achieve nothing.

I particularly remember Fawkes' article about it, where he took newspapers to task for sending hordes of reporters over to London where they...sat around and did nothing. The conference was so long and clandestine that the London-based reporters would send back stories about the weather or about the niece of some minor figurehead learning to ride a horse, but the papers would trumpet this stuff as NEWS!!!!!!

Anyway, Dr. Seuss doesn't seem to be taking these issues on in his cartoon. He's just drawing funny Frenchmen. Bless him.
Posted by Adam Thornton at 8:14 PM

You know, the French captain was not far off the mark - if you're talking about Napoleon, the island of Hispaniola, and it's around the year 1802.

In the book "What If 2," edited by Robert Cowley, historians speculate what might have happened had a certain event been different. It's counterfactual history (and a very good book).

Thomas Fleming's chapter, "Napoleon's Invasion of North America," speculates that the mosquito-borne fever that killed many of Napoleon's soldiers on Hispaniola prevented Monsieur Bonaparte from invading New Orleans and waging war on our continent.

So, yes, we've just begun to Flit! Don't spray until you see the whites of their compound eyes! Damn the torpedos (oops, wrong century)!

You'll have to pry my Flit gun from my cold, dead fingers!

I've heard good things about the "What If 2" books...are they good history-teachers for people who want to learn what DID happen too?

And Syd, I was just admiring the design of the hand-held pumpy things and wondering how they worked.

I know this one! The same way an atomizer works, air moving over the tip a tube creates low pressure, so liquid is pulled up from a reservoir.

I grew up watching the highly excitable Julius Sumner Miller on PBS shorts like this, because we didn't get House of Frightenstein in the states. (Apologies for nerdiness)