Dunjonquest: The Curse of Ra

Rah rah rah! Here are the maps for the third and final expansion module in the original "Apshai" trilogy, "The Curse of Ra."

Level One: The Well of Forever 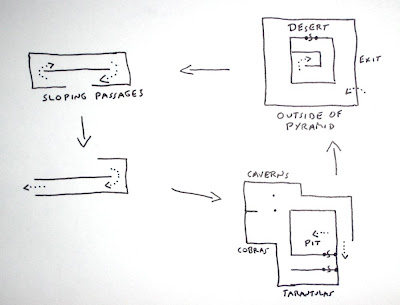 This simple level is a nice introduction to both the game and the overriding Egyptian theme, and it only gets hairy once you reach the pit. 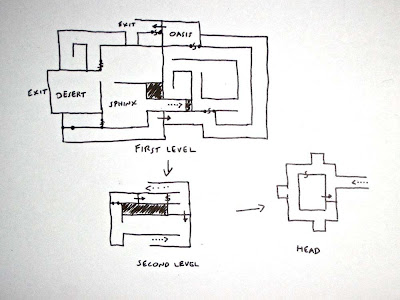 No annoying riddles in this one. The actual MONSTER sphinx is something you meet right near the beginning. The fun part is enjoying their attempt at creating a level which is actually SHAPED like a sphinx, complete with paws, ears, and a tail.

And what a huge place it is, too! Here's the exterior and interior: 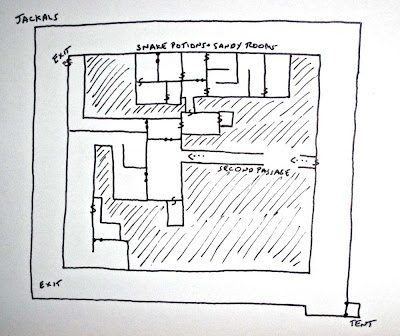 but you only reach those inner rooms when you go partway up and then return through the FIRST passage: 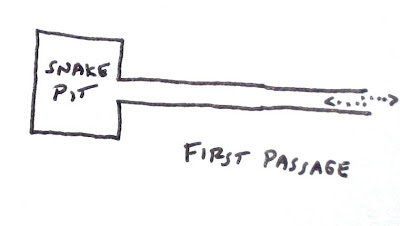 Compared to all the other levels, this one provides the most opportunities for increasing your stats (in the sandy rooms to the north). Watch out for the moving statues.

Because the Apshai engine didn't allow for triggers or conditions of any kind, attempts to convey a complicated causal environment were bound to falter now and then...if you enter a room LATER that the level designers assumed you'd enter much EARLIER, for instance, you might read a room description that tries to evoke a progressive narrative by referring to a room you haven't been in yet. Causality gets reversed. It feels weird.

This is my way of saying that if you proceed through the levels in the way they HOPED you would, you'll feel nicely submerged in the action. If you DON'T, however, then you might feel like you're watching the episodes of a TV series in the wrong order.

Fortunately I played "Temple of Ra" in the "correct" way, so I was baffled by the "mysterious force" in the secret area following the Temple Room. I do suggest you play through the base of the Ra statue before going to the upper section.

And after you're done...that's it for "Temple of Apshai!" But don't despair, the "Hellfire Warrior" sequel comes next.
Posted by Adam Thornton at 8:44 AM

Are you directionally dyslexic? I know I enjoyed Doom only because it gave me a sense of empowerment over that aspect of life. :p

The satellite maps have been a real God-send(sic?) for me.

P.S. Why did you opt for headshrinking instead of comp science in college? Rebelling against the inevitable? :p

Nope, I'm not directionally dyslexic! I've got a great sense of direction, actually.

What I personally love about all this mapping stuff is the exploration and exposure of a little world.

As for why I didn't go into computer science: my math marks weren't good enough, not by a long shot! I was good in symbolic logic, etc., but I couldn't get my head around the damn math.

Thanks for sharing, I will bookmark and be back again