Big City Muffy in Minneapolis (May 13)

I started a journal on May 13th at 7:30 am. I stopped making entries in the journal at 9:15. Why? I don't know. Maybe we can figure it out as I present this retrospective examination of my days in Minneapolis, from May 13th to May 20th.

But first an explanation. I signed up to attend the three-day annual Technical Communication Summit, and since my airfare would already be covered I decided to extend my stay in Minneapolis, therefore getting a short "holiday" that theoretically would cost me very little. I find it sad that whenever I visit someplace, I always have to leave just after I've met a group of wonderful people. This way I'd meet wonderful people...and have the time to get to KNOW them a bit!

The problem is that I'm a sort of nervous, panic-stricken individual who does not adapt well to change. I also had to leave my cat behind for an entire week, and I'm sad to say that I've grown almost TOO attached to her. I've become the type of person that I make fun of: reclusive, ritualistic, and in love with an animal. So this trip was bound to be a bit trumatic.

I think airports are awful because their procedures change every time I visit them. At 6:30 am on Sunday morning -- still depressed about the cat -- I dealt with new automated machines that both check your luggage AND give you a boarding pass, which required more than the usual amount of passport/E-ticket/luggage juggling. I was also embedded in a group of women who were going to Minneapolis for a missionary conference. One of them shouted "Praise Jesus!" when she discovered her misplaced passport.

My first instinct was to make fun of these people -- if Jesus needs to intervene every time you're a scatterbrain, shouldn't you shape up to make his job a little bit easier? -- I started to form a resolution that was to cause much joy and suffering throughout the week. I watched these women sitting together and waiting for the plane, and I couldn't help acknowledging that they were the most friendly, social, and happy people at the Gate (if not in the entire airport). They swapped stories about child-rearing and discussed their needlepoint projects ("It's the Twelve Days of Christmas, but the problem is that they get more detailed with each day!") while the rest of us hunkered down with our books and iPods and our soon-to-be abandoned journals.

So I made this resolution: in Minneapolis, I would be as friendly, giving, and tolerant as possible. I would emphasize COMMONALITIES instead of differences. Instead of relying totally on the kindness of strangers -- which I so often do when I travel -- I'd try to give something back to society by being generous and open-minded. In short I'd be a gullible schlump, but we'll get to that on May 16th.

In the airplane I was thrilled to see Lake Huron. Or was it Lake Ontario? Or Erie? It was hard to say but I DO know we flew over some awfully big lakes. We also looked down on segregated patches of farmland and gradually lost sight of smaller things like cars and houses, though the pill-shaped racetracks were always visible, as usual. This leads me to wonder (as I always do when I fly) why we have so many racetracks? They're everywhere, but it never seems that way on the ground. We also got to see the tops of storm clouds which were black and evil and rising up toward us in characteristic anvil shapes.

On the ground, however, Minneapolis was sunny and hot. It was 10 am on a Sunday morning, but with the time change (and the fact that I'd been awake since 4:30) it felt like the afternoon, and my first view of the city was devastating: no people. No cars. Just deserted buildings and shops. Not even the Scientology and Christian Science buildings were open. Since my hotel room wasn't ready yet I wandered around and around and around: skyways, parking garages, enormous corporate headquarters, no place to eat, no place to buy a coffee. And only me on the streets.

I was already sad about "the cat thing" but now I had a new worry: was Minneapolis a pathetic ghost town? Was I doomed to spend an entire week in this place without new friends or new experiences or any form of social interaction beyond the Automatic Baggage and Boarding Pass machines at the airport?

Feeling justifiably homesick and depressed, I made a beeline to Barnes and Noble to buy books that wouldn't make my life any more difficult than it already was, books interesting and happy but not Opra-stupid. I settled on "The Big Bang" by the wonderful Simon Singh and a book of "Challenging Logic Puzzles" by Barry R. Clarke ("Hearts is one place before Bleereye who was two places after King"). As a sidenote, I found MacKinlay Kantor's literal transcription of regional dialects to be even more depressing than the book's subject matter ("Hooey, juss out, juss out. Hooey, aggstry papey, hooey. Allll ay-bowt thu big----Hooey, hooey!")

I bought a third book on the recommendation of a woman at the bookstore -- "Me Talk Pretty One Day" by David Sedaris -- but I didn't get around to opening it. I was uncertain about that woman's judgement, since her first recommendation -- after hearing my "interesting and happy" requirement -- was a book about the destruction of the World Trade Center ("I know it doesn't sound funny, but it really is!")

5:00 pm: Finally time to register for the Conference and join the "First Timer's" meeting, where they deliberately make you sit at large tables with other people who are all looking inward, supposedly so you can meet each other. I sat beside Art from Illinois, who told me all about the Canadian parliamentary system and kept confusing me by saying "English" when he meant "British." He shouted out details about poverty, racism, politics, and economics. He told me how best to interact with Native Americans, all without any prompting whatsoever. When more people joined our table and another one of them happened to be Canadian, Art yelled out "Thank God the Canadians are here, now we'll have some SMART people at the conference!" I decided that Art was not somebody I wanted to hang around with.

Instead I went to The Local with B., a woman who rarely made eye contact, instead gazing to the right of my face in a lofty way. We had an illuminating and equal chat about books and food and writing, but when somebody has a lofty expression which she won't even aim directly at me I figure they either don't like me or they don't like themselves. So B. and I didn't eat food together again. 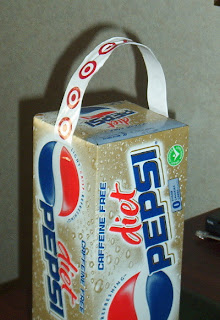 Afterwards I shopped at Target for the first time, which made me think of Josie and the Pussycats. I was amazed when the cashier built a sturdy "carrying handle" for my Diet Pepsi out of Target stickers, but when I laughed and pointed she glared at me like it was something I should be used to, which means this innovation is probably a common one at Target stores. It certainly made it easier to lug the Pepsi back to my hotel.

One more word about Target: I always thought it was similar to Walmart, but if you say that to people who are familiar with Target they will vehemently deny any comparison. People in Minneapolis are proud that their Downtown is almost totally devoid of chain stores, and rightfully so. Unless you count Target and Starbucks and Macy's and Walgreen's, of course.
Posted by Adam Thornton at 9:39 AM

"Diversey." Diversey Avenue, 3200 North, in Chicago. The Diversey bus used to run from Elmwood Park in the west of Chicago all the way downtown, and I would sometimes take it to high school--you can finish a lot of Latin homework in 75 minutes.

Wikipedia says that "Diversey" is a novel of Chicago gangsters. I would guess the gibberish you quote is supposed to be the phonetic equivalent of a newsboy selling his wares: "aggstry" = extra.

I only read Kantor's "If the South Had Won the Civil War," a small novel that grew out of his late-life success with "Andersonville," a huge novel about the infamous Confederate Civil War prisoner camp.

He was, however, involved in two seminal American motion pictures made after WWII. William Wyler's "The Best Years of Our Lives" was based on a blank-verse novel by Kantor, and he also did the story and screenplay (with Dalton Trumbo) for Joseph Lewis's film noir "Gun Crazy," which has Peggy Cummins playing one of the great noir femme fatales. You should see it if you get a chance--that is, if you still trust my taste.

For the first forty pages I thought "Diversey" was the name of the wanton tramp on the front cover. Yes, that was a phoenetic rendering of a newsboy, but EVERYBODY (except the protagonist) talks that way in the book, which becomes really tiresome: the heroine (Josephine) is always saying "juss think" and "less go home" and "oo, iss lonesome."

The book does have something to do with gangsters, but I gave up on page 59. The disconnect between pulp covers and their actual content can be amusing...it's billed as a "Compelling Tale Of Passion and Conflict," "She Was Alone In Town And Looking For Excitement," and the artwork depicts decidedly 1950s hairstyles and clothes (though the book is set in the '30s).

Even though I'm putting the book back on the shelf, "Gun Crazy" does look good!

I grilled several people at the conference about Diversey Avenue, and they said it was a long street. :)