Why were so few musicals made during the '70s and '80s? Because producers had either forgotten the crucial elements of a Wonderful Musical or they found themselves unable to pull those elements together.

First off, here's my impromptu list of required elements in a musical:

Think of the movie musicals that SUCCEEDED in the '70s and '80s. They contain all of the above elements. And even the ones that didn't succeed and subsequently became cult favourites (Phantom of the Paradise, Rocky Horror Picture Show, Tommy) had killer songs and performers who -- even if they weren't top-notch -- still behaved like they were putting EVERYTHING into it. Paul Williams couldn't act but he was still fun to watch. The Rocky Horror cast fell back on theater experience (and heels) to "sell" themselves. Ann-Margaret...well, got doused in soap suds, beans, and chocolate. How many actresses would put up with that, with Ken Russell probably flashing his genitals behind the camera at the same time?

The musicals that DIDN'T succeed tended to lack this CRUCIAL enthusiasm, and I believe this is because they were "committee" efforts that were trying to cash in by bringing in the NEWEST stars and the NEWEST fads. They put "stardom" above "acting ability" and "chemistry. "The Wiz" and "Xanadu" were largely overshadowed by their gimmicky concepts: "Diana Ross in a funky urban remake with Michael Jackson" and "rotoscoped Newton-John on roller-skates with animation by Don Bluth, and oh yeah, the Tubes," respectively.

But the only thing more embarassing than watching Gene Kelly in a giant pinball machine is paying careful attention to 1978s "Sgt. Pepper's Lonely Heart's Club Band." It has the requisite well-written songs and the professional back-up dancers, but those two bonuses only highlight how awful everything else is.

It goes without saying that Peter Frampton and The Bee Gees don't belong here, and I don't mean in an "isn't Diana Ross awfully old to play Dorothy?" sort of way. I mean that they're unsuited to the music and that they cannot act. They sound insecure and they look insecure, in every scene, all of the time. They're the main characters in the film but they CANNOT deliver enthusiasm...they're too busy remembering not to look at the camera. Nothing spoils a sad, pivotal scene more than the Gibb brothers tidying up their receeding rock-star hair in a funeral procession.

George Burns comes in second as Most Unsuited to his role. As Mr. Kite he actually does quite well, but when called upon to sing "Fixing a Hole" with small children, my goodness...if you only watch ONE thing in the movie, WATCH THIS. In case you missed it, here's his inspired contribution to the songwriting of Lennon and McCartney, painfully transcribed from the DVD:

This "white man scat" comes with dance steps that the children can remember but he can't.

So we've got iconic songs that are gorgeously written, being performed by bloodless disco hipsters or bloodless non-singers (don't be surprised that I'm lumping Donald Pleasance in the second category). It doesn't help that the song production is anemic, perhaps George Martin's revenge for all those years he didn't get any credit. Sometimes the performances ARE good, though...Dianne ("who?") Steinberg is the one bright light as an actress, singer, and sufferer of a pre-movie bikini wax. Billy Preston's "Get Back" is inspired, though the scene itself was obviously shot after the filmmakers ran out of money. Aerosmith kicks butt (even if they get beaten up by The Bee Gees...SERIOUSLY) and Sandy ("WHO?") Farina also had some talent behind her rabbity overbitten face. And even though Steve Martin can't sing, he at least LOOKS like he's having fun.

What does that leave us? The set-pieces, while obviously expensive, look like they were cut out of a cheap pop-up book. You have the king of toilet jokes (Frankie Howerd) managing to turn "When I'm Sixty-Four" into a naughty little number. Not to mention the cheesy '70s sex routine, which means Robin Gibb going pop-eyed and falling over when presented with raunchy women wearing Parliament's cast-offs (Stargard, AKA "WHO???").

At least "Sgt. Pepper's" has the professional back-up dancers. They're REALLY the best part of the movie. Don't watch the principal characters, just look at the people dancing around behind them. Pay particular attention to "The Computerettes," two professional ballerinas in creepy outfits who sing like the Bee Gees filtered through a vocoder.

To give credit where credit is due: Steinberg and Paul "Cousin Kevin" Nicholas singing "You Never Give Me Your Money," Barry Gibb's "A Day in the Life," and Farina's "Strawberry Fields Forever" are all gems. And, honestly, the scriptwriters have done a pretty good job of making a coherent, clever, child-friendly plot out of a bunch of disconnected (and often mystically drug-inspired) songs. 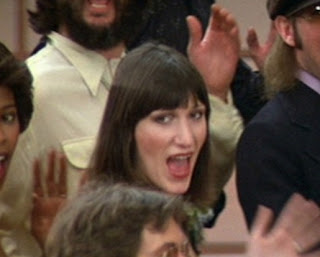 It's also worth it for the "slice of the '70s" scene at the end, featuring an esoteric collection of people who worked closely with The Beatles at some point in their careers (but mostly Carol Channing fluffing her words).

And hey, who's that near the back? It's Marcy Levy! And to think I drank booze and did a flygirl dance with that woman!

Posted by Adam Thornton at 5:36 PM

I have awful memories of this from when I was younger. My older friend took me to an afternoon matinée and I think it was the first time I wanted my money back.
The only saving grace for me was Steve Martin doing Maxwell's silver hammer. It was just zany enough to work, and the song still sticks with me today. I even think he revisited the character when he was the sadistic dentist in Little Shop of Horrors.
I had hoped that I would not have to revisit those memories again. Thanks for dragging them back kicking and screaming

I can still remember--and it will be FORTY "years ago today" pretty soon--coming home on the Lake Street el in Chicago, reading the lyrics on the back of my just-purchased copy of "Sgt. Pepper's." What strange and beautiful creature had pop music morphed itself into? "Messrs. K and H assure the public their production will be second to none. And of course Henry the Horse dances the waltz." And I hadn't even heard the snippets of calliope music Geroge Martin would add to illustrate that waltz.

Thanks for deconstructing this travesty so elegantly and so thoroughly. If I ever watched a minute of it, I am sure I would stroke out, and every synapse in my brain short out in a nanosecond, as my eyeballs would start from my head.

I have similar memories, except I remember seeing it several times on CityTV, and I was totally confused...especially by Steve Martin. He definitely reprised his role as the dentist ("I thrill when I drill a bicuspid! I swell when they tell me I'm maladjusted!")

Now Little Shop of Horrors succeeded because it had ALL the right elements, plus cleavage. But it was sort of "funny cleavage" so it was okay for the kids. I remember seeing both "Little Shop of Horrors" and "Stand By Me" at the multiplex in Kitchener which is now a martial arts studio.

In any case, you're very welcome. I only hope I did the movie justice.

I think you can safely spend the rest of your life without seeing this one, Eric. Unless you REALLY want to see Henry the Horse (though he doesn't dance the waltz).

It took me until my 20s before I really enjoyed the Sgt. Pepper's album. I knew the songs from the Yellow Submarine film, and I loved the songs for sure, but the album annoyed me with its stereo separation. In the early days of stereo there was a lot of experimentation going on, and it wasn't yet taboo to put the drums entirely in your right ear, for instance.

Abbey Road was definitely the album for me. And smatterings of The White Album.

Sorry, I should qualify this comment by stating I HATE musicals. If there is an exception to this sentiment, this movie is not it. I remember watching was so painful...without compare. I don't think that "zany" anything would have grown on me with age.

I do love the Beatles, though.

Vanilla, if there's one thing I know it's that you SHOULD NOT watch this film.

Sgt. Pepper's was my all time favorite movie of my childhood next to The Pirate Movie and Emmet Otter's Jung Band Christmas. I think Peter Frampton plus the Bee Gees was genius and I love the Beatles. Doesnt get any better. But then again I was a child of the 70's