Big City Muffy in Minneapolis (May 17)

I apologize if you don't see a "comments" link in these posts...I think Blogger is a bit messed up at the moment as these links seem to come and go. Just comment in another post, or try refreshing the page!

Thursday morning and my vacation had officially started. No longer on an expense account, I made the paradoxical decision to start eating extravagant, non-complimentary breakfasts at Hell's Kitchen. People put great stock in their homemade peanut butter, but I didn't care about that! I wanted bacon and eggs and grease...no more Raisin Bran and CNN for me.

I had to stockpile some energy because I had a full day ahead of me. Yesterday both Jamie and Cindi had independently encouraged me to explore UPTOWN Minneapolis, a mysterious south-western realm beyond the highway and the convention center. Walking past these landmarks was significant: I was going where few STC Summit attendees had gone before! 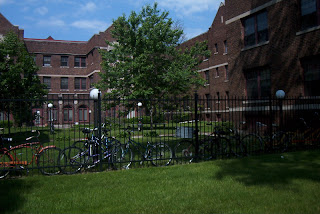 And it was beautiful. I'd grown heartsick from too many skyscrapers, too much glass and steel, businessmen and panhandlers, parking garages and pavement. Within minutes I was walking down quiet, tree-lined streets where human beings actually lived. There was grass and blue sky, and people quietly going about their business.

I should pause and say that Minneapolis, as a whole, seemed to be a very liberal city. I followed Vanilla's strict advice never to talk politics while on vacation, but that didn't stop people from talking politics with ME...and nobody had anything but loathing for the Bush administration...at least nobody who brought it up, anyway. Either Americans talk freely about this issue amongst themselves as a way of letting off steam, or they like to talk about it to people from other countries. 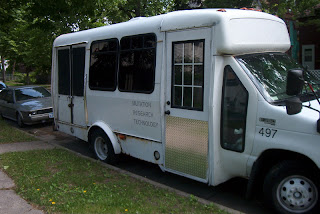 I didn't see a single "Go Go Bush/Cheney!" sign until I left the city on Saturday, but I saw many anti-Bush and many more anti-Iraq signs, posters, T-shirts, and bumper stickers.

On an unrelated note I even found an official Mutation Research Technology truck parked in front of somebody's house, but since the truck's name was "Nebuchadnezzar" (according to a sign on the back) I assume they're less than serious about whatever it is they do.

It's not often that I find myself REQUIRED to kill time, so I wandered through parks and alleys, working my way down to Lyndale Street and spotting rabbits along the way. It was difficult for me to get a handle on Uptown's layout because it seemed to have several different arteries (Nicolette, Blaisdale, 24th Street) and these arteries were a jumble of residences and shopping areas and Wendy's restaurants. There was no single "center" of it all, but there was always something ELSE around the most insignificant of corners. 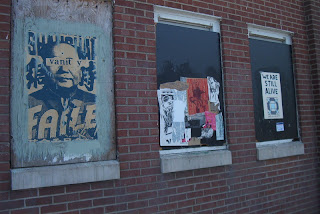 I made my rendezvous with Jamie Monroe at Vera's Cafe, the most laid-back meeting spot on earth. People wandered in and out of the patio, leaves dropped on our table, bouyant sparrows made social visits. We were shortly joined by the Brass Rail bouncer I'd met the previous night, whose name I shamefully forget and who I'll call "Cleo" (again, until I find out his actual name).

I'd originally planned to spend a bit of money on something -- clothes, shoes, kitsch -- but after last night's $60 "Bathroom Break and Scream-athon" I was less enthusiastic about depleting my funds. So I trailed after Jamie and Cleo as they showed me all the shopping hot-spots, and I even heard tantalizing rumours about a lake nearby. We looked at wigs and used clothing and novelty lingerie. Apparently the entire area was safe as long as I didn't go "past the K-Mart," so I decided to return on Friday and have another long look around. 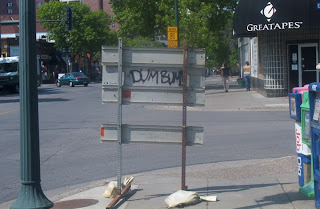 Leaving my two Minneapolitan guardian angels behind I made the long trek back downtown. Here's one of the many instances I found of pervasive "Dumbum" graffiti: zero style but an A+ for fun!

Apparently the restaurants in town are packed with people even when the conferences are over, so I tucked myself in a corner of The Local, hemmed in on all sides by businesswomen with yacking laughs and belled-out pastel skirts.

The Local, like all the other Minneapolis restaurants I went to, had ridiculously powerful hand-dryers in their bathroom. This became a running joke during the conference. Even more disturbing were the toilets in Brits Pub, which warbled incomprehensible, quiet English phrases when you walked away from them, causing everybody to look around in alarm. The parking garages in Minneapolis also speak during rush hour, saying -- over and over again -- "Warning...car approaching." One of them said this to me in an East Indian accent. 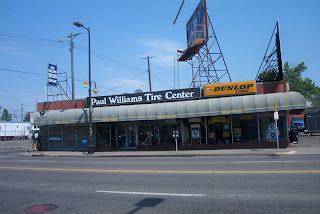 I'd spent several days sitting in large conference halls full of people who coughed without covering their mouths. My Target vitamin C would only protect me for so long unless I spent a night or two in bed.

Looking after my health I returned to my hotel room, disposed of yet another newspaper that I'd forgotten to cancel, and lulled myself to sleep with logic puzzles and theories about The Big Bang. I was eagerly looking forward to my final night in town, and I'd already accomplished so much...I'd even found out what composer Paul Williams did with proceeds from The Muppet Movie.
Posted by Adam Thornton at 3:13 PM

That Mutation Research Technology truck looks like it's an old Paratransit
bus. I used to drive a Para bus.

I think you're on to something! It DOES look like one of those vehicles.

I'm certain it is one. Just some meaningless triva.