Big City Muffy in Minneapolis (May 14) 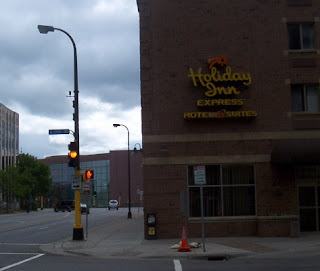 This is part two! Click here for part one.

They provide a complimentary breakfast in two small rooms at the Holiday Inn, and they discourage you from lingering by playing CNN really loud. They also employ this technique in the lobby to keep you from using the computer for too long (and to also keep you updated about stranded whales, shipwrecked booty, and Jerry Falwell's long-overdue death).

In this picture you can see the conference center in the background. Everybody gathered there at 8:30 am for the Keynote General Session, where STC people honoured other STC people and where Al Gore (absent) was given an award for "An Inconvenient Truth," which the three bull-necked guys in front of me scoffed at. The crowd of educated, critical thinking technical writers seemed surprisingly lukewarm about Gore's film and his techniques of communication. A subset of the crowd became even more edgy when Simon Singh, the keynote speaker, praised the film and trashed "The Great Global Warming Swindle."

Ah yes, Mr. Singh. A few years ago I read his "The Code Book," and on May 13th I picked up his latest book ("The Big Bang") to help save me from an avalanche of depressing novels. As honourary STC fellow, Singh spoke at the conference and gave us a deconstruction and analysis of his "Fermat's Last Theorem" documentary. He even confessed to his own switcheroo: he'd subtly modified a quote from a mathematician in order to translate it into layman's terms. He discussed the lines that documentary filmmakers need to cross in order to make an understandable film. In short, as long as you keep the intent of the quote without distorting it, you're probably okay. If you feel guilty or the person you interviewed gets angry, that's bad.

11:00 am - Since the "How to Design Anything" session was cancelled I found myself attending "Tips and Tricks for Adobe RoboHelp Users." I constantly use RoboHelp (version five) to create online and dialog help for projects, and it's absolutely hellish...but it does what it's supposed to do (and if we'd upgrade our copies we'd be able to do a bit more, like create conditional text and use text variables).

Unfortunately many of the tips were for users of version six, and the one tip I was looking forward to -- how to prevent a help topic from appearing during a "search" -- was a terrible and embarassing kludge that I wouldn't wish on anybody. So I didn't get anything out of this session other than a trial copy of version six and a sneak preview of the Totally Exciting and Amazing Version Seven.

Here's my own tip for Adobe: don't send a developer to demo a product unless he does professional demos on the side. The guy who showed us Version Seven was incoherent and spent most of the time showing us how to move and dock windows on the screen, which is not much of a "feature" and something that people know how to do anyway. Based on the sneak-preview I can confidently report that there are many, many ways to move and dock windows in the new version of RoboHelp. In fact there are almost LIMITLESS ways to meticulously move a window, if you include moving the window in all four directions, as well as all the combinations of those directions. You get a lot of window-docking-mileage out of Robohelp Seven, and there may be some other features too that we never got to hear about.

During lunch I ran into Tim from Philiadelphia, who recognized me in the Panera Bread line. He followed the networking instructions we learned during orientation ("It's just talking!") and we hit it off. Tim invited me to a somewhat nebulous and impromptu eat/drink meeting scheduled for that night, which I happily agreed to. Tim became my most constant and welcome companion in Minneapolis and I hope I get to attend next year's STC Summit, which will be held in his hometown.

During lunch I also ran into Sue, who I used to work with in the pre-buyout days of my company. It's ALWAYS a pleasure running into Sue! Plus we got to gossip about work in a way that we couldn't do when she was actually an employee...

1:30 pm - "Effective Page Layout for the Nonartist." I can't design a chart or a diagram to save my life so I hoped to get some tips at the summit. This session (by the very entertaining Jean-luc Doumont) was more for people who design 20-page reports than for those who write 200-page manuals, but I found two of his ideas useful: more blank space equals greater readability, and it's bad to give yourself too many options. He recommended choosing strict constraints for your projects -- one font, one style, one colour, all spacing constrained to horizontal and vertical integers -- with exceptions allowed ONLY when doing so adds value. Also be consistent.

In short, the page templates which we use at my workplace are ALREADY excellent and conform to most of his design specifications, for which I can thank my manager (who was also nice enough to approve my Minneapolis trip, incidentally).

Then Doumont went completely off the deep end, describing how he manually composes his emails so that EVERY line ends EXACTLY at an abnormally short right margin, INCLUDING the final line. Seriously, he chooses his words and punctuation and sentence structure to make sure his monospaced text ends PERFECTLY. God forbid should he need to add something in the middle of a paragraph at a later time, or should the email receiver view his emails in a small window, but he claims that nobody has ever complained. Chances are that's because nobody cares as much about email formatting as he does.

Incidentally the different elements of technical communication -- formatting, "good English," and "good content" -- kept being debated during the conference. I'll get to that later, but let's say that Doumont still believes that formatting is EXTREMELY important (but, like I said, his demographic is more businesspeople and ad agencies that folks who read computer manuals).

3:30 pm - "Road Signs: Finding Your Way in the Visual World." I couldn't resist ANOTHER presentation by Jean-luc Doumont. This one was 75% fun and 25% content, but his points were interesting (if not always useful).

By juxtaposing North American signs with European signs he illustrated the differences between "high context" and "low context" cultures, and showed the pros and cons of "wordy" versus visual signs. In short, wordy (high context) signs spell everything out for you but can overload you with information, can be difficult for people who don't speak the language, and still assume that the reader understands some degree of context ("xing ped" for example).

More visual signs are useful if their concepts are unambiguous, but it was easy to understand that there are problems with standardizing colours/shapes/symbols, not to mention gender issues (how are men and women figures represented?). Is it better to use old, established icons (telephones, televisions) as opposed to updated ones that better represent what the objects look like today? And what kind of a dog is a dog, anyway? 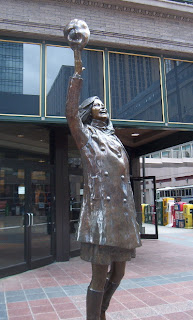 Tim and I met up with the rest of his posse, one of whom was an ex-Minniapolitan who took us to a bar with a moose head in it. We discussed the Boston Molasses Disaster and finally found that statue of Mary Tyler Moore that everyone told me to see. I found an instant conversational chemistry with C., who was born and raised in the deep south (New Orleans, Austin) and who told me what SHE thought about politics, Katrina, books, and The South.

C. really wanted to visit the 112 Eatery so we began a drunken walk which first took us to the Mississippi river, then past "Sexworld," and finally to the eatery itself, which was uncomfortably swanky but apparently served excellent fois gras meatballs.
Posted by Adam Thornton at 1:36 PM