Big City Muffy in Minneapolis (May 15)

This is part three! For parts one and two see May 13th and May 14th.

8:30 am - "If I'd Known Then What I Know Now--Lessons Learned and Best Practices." Many of us started Tuesday morning watching this panel discussion. Besides pointers about resumes, career advancement, and mentoring, the recurring focus was on a theme that was pervasive throughout the entire summit: since many people now get "help" through forums and wikis as opposed to formal documentation, the "good English" and formatting of a help document is becoming less and less important. The user with broken English can give you just as good (maybe even more cutting edge) help, and they can do it immediately without any frills or nifty pictures or anything.

This upset the two editors in the audience. Their job was basically to make sure that their documents looked good and were written correctly, so what sort of future did they have in a forum/wiki world? The panelists were pessimistic, the editors miffed.

I think the pundits are so anxious to spot a trend that they're jumping the gun on this one. Many people read manuals -- I'm one of them -- and there are some environments where manuals are still considered essential. The manuals that *I* write are for products bought by large media networks, which are disseminated to operators throughout the company. These networks DO NOT allow their operators to just play with the software until they figure it out; they need their operators to be up to speed BEFORE they go on air. And as of a few months ago these companies were CLAMORING for the latest and most up-to-date manuals.

Whether this is a disconnect between management and users, or a difference between consumer products and business products, is difficult to say. But I'm not willing to throw page design and "good English" out the window yet.

10:30 am - "The Use of Cultural Models in Web Design and What Eye Tracking Reveals about Web Usability." Many of us found titles like this to be ironic at a technical communication summit, not to mention the ill-designed session manual (which session period does this page header refer to?) and the dreadful PDF version (which started on page ten and caused constipation in our printers). Regardless, my psych/globalization side wanted to see this session even if it didn't relate to my job in any way whatsoever.

Kathleen Gygi gave a lacklustre report about websites in Uzbekistan. Apparently these websites are usually blue, or something. It was difficult to follow her conclusions, let alone understand how she'd arrived at them (a scale of website blue-eyness, maybe?)

Then Lynne M. Cooke gave a much better presentation about an eye tracking experiment, intended to find out how users look for specific pieces of information on web pages. Her main conclusion was that users look for links that both match their search criteria AND speak to their personal conceptions of themselves as audience members, and her secondary conclusion was that people don't often look at pictures on web pages, especially if the pictures look remotely like advertisements. This was disputed by another researcher in the audience, which brought a spark to the discussion until they'd figured out the differences in their research methods (people DO look at pictures if the picture is of a product they're specifically searching for).

I went back to The Local for lunch with Sue and her brother, where we chatted about the problems with pollen in Minneapolis (which had laid a few people low already), then returned for:

2:00 pm - "Polishing Your Pictures." Like I said, I came to the summit partly to find out how to improve the images and charts in my documents, and Patrick Hofmann's presentation made lots of sense: standardize the attributes of your images, decide on the "primary focus" for every image, decide what needs to be emphasized or excluded, and test your image by VERBALIZING what you see in it. He described some methods for displaying screenshots, which was a real revelation for me: you don't NEED to show the entire dialog in the manual! You CAN crop it, if you present the cropped area properly! That's stuff I can USE.

But throughout the presentation I couldn't help thinking that I recognized him, and that he was lacking the midwestern twang or southern drawl I'd been growing so accustomed to. When he mentioned growing up in a small town in Ontario I became even more suspicious. I spoke to him briefly after his talk and he instantly recognized me from Club Abstract -- a K/W native! -- and though we tried to make plans to get together we just never managed to connect, for whatever reason. 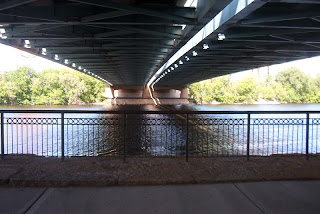 4:00 pm - Rather than go to Tuesday's final session I decided to spend the afternoon exploring downtown Minneapolis, taking some pictures along the way. I'd heard about the "warehouse district" that supposedly had some hipster stores in it, and since we'd found ourselves among refurbished warehouses during our previous night's walk, I retraced our steps and tried to explore the northern part of the city.

Starting at the Mississippi -- which is much more impressive than my picture conveys -- I went Northwest in search of warehouses. I zig-zagged back and forth a bit but was unable to find any shops, and eventually I found myself in a district full of REAL warehouses and factories, across a set of railway tracks and totally lost. I could SEE downtown Minneapolis but I couldn't get back to it: I was blocked off by fences and closed pedestrian walkways, and when I say "fences" I mean eight-foot structures with angled barbed wire at the top. 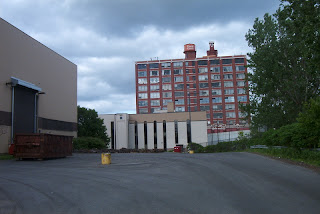 In this picture I'm trapped within a literal maze of fences, behind a series of factories whose gates are locked and unattended. Worried about rain, closing gates, and the strange man who I kept running into, I'd decide to go on another few blocks, only to find myself in yet another fenced-in dead-end.

Finally I retraced my steps almost all the way back to the river. Back at my hotel I realized that I had no dinner plans; everybody makes these plans at the final sessions, which I'd just skipped. Tim told me that another amorphous group of writers would be meeting at Brits Pub. I found myself an honourary member of the "Lone Writers" special interest group, eating samosas with the shyest Calgarian you can possibly imagine. There was speculation about a trip to the local gay bars but I decided to turn in early. The night was over, it was too late to start getting into drag, I was bushed, and what the heck would I do during the next four days?
Posted by Adam Thornton at 4:16 PM